The Annual World Extreme Funride Championships came and went in a haze, it's always a great opportunity to ride what must be one of the most stunning scenic routes in an urban environment............................without cars.

Actually that's only partly true. Argus for me means getting bikes ready for people. This year I had the pleasure of sorting out an old tandem for Storm and Julia. This tandem has a history with the Durr girls, I guess they now own it. Under very difficult circumstances, Storm and Julia completed the ride. No training, nada, just attitude. Ballers of note. (But Julia's my god-daughter, so she has to be). In the footsteps of her older sisters who aren't exactly slackers themselves. All on old steel real deal road bikes.

Having completed the Argus our real mission was to ride from Prince Albert to Montagu, along the route used by the Freedom Challenge.


The usual suspects, Sandra, Kim, Adino and I. Yet another cross-border raid right under the noses of the imperialist forces, by the time they had wiped their eyes, we were gone. Gorilla raids, a la DC http://drunkcyclist.com/2010/05/21/the-dirty-biker-cometh/ 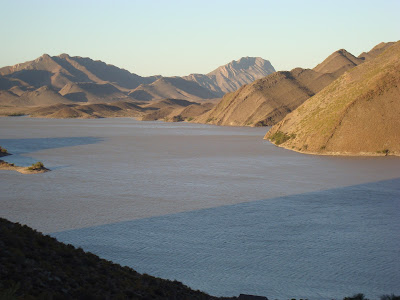 Last time I rode up Bosluiskloof it was with the two Curts von Keyserlingk. That time I lost six - love to the mountain. This time it was only slightly better. The last 5km gradient was not made with cyclists in mind.

The Freedom Challenge narrative says something along the lines of "by this time you will have learned that the Karoo is many things. Flat is not one of them". Yes, indeed, David.

Past Jaco Hunlun's farmhouse for water, unfortunately he wasn't there. The Freedom Challenge is many things, one of which is a loooong network of really good people, Jaco being one of them. All along the trail are farmers and others who welcome riders at all times of the day. A transect of good people.

Vleiland if you must. Yes, you must. Stop and buy a coke and chips at Ockie Olivier's shop. This is another world.

Rouxpos, after the last climb in that heat, then swooping down to the cool lawns and the renowned Rouxpos hospitality. To put it in context: People on the race generally try the ride from the luxury of Dennehof directly to Rouxpos. Up the Swartberg pass, into Gamkaskloof, up Die Leer, and then still quite some ride to Rouxpos. Now I know why they do it. Baie baie dankie Gerhard en Ronel.

'Twas a warm night, filled with mosquitoes. When I went out at 5am, I walked into rain, we'd been sleeping under a thatched roof and hadn't heard a thing.

The generally downhill ride out of Rouxpos is made even better with light drizzle and a tailwind, then a short sharp climb and before we know we're on Wagendrift asking for directions. It's in the rules http://www.velominati.com/the-rules/ somewhere.....the bit about asking locals for directions. Ask them all, and after the heated debate, obey the consensus.
Back on the district road, we hit a recently re-surfaced section. Clay isn't used as a road surfacing material in many parts of the world, I guess it's just a local speciality. Clay that has been wet, rolled and then left to dry makes a better riding surface than smooth concrete. I won't be here when the winter rains change all that.

The problem with smooth roads is that the distance flies by faster than you want it to (well almost!) It wasn't long and we were in the pool at Anysberg. Having met Kevin setting up camp under the gumtrees. Kevin had been cajoled/bribed/forced into this by his sister. At least he did it with a smile ;) That afternoon was one of the last summer thunderstorms, with a cold front on it's heels. 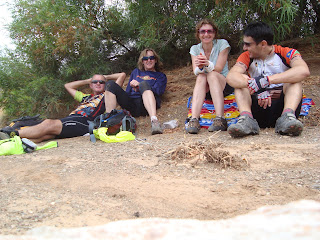 Across the open plains after Anysberg into the teeth of a north-wester, with rain, starts to feel like "The Race" again. I am still in awe of people who ride all this in the middle of winter. I have to stay in Prince Albert to fix their bikes, so I will never be able to do "The Race". That's my story and I'm sticking to it. 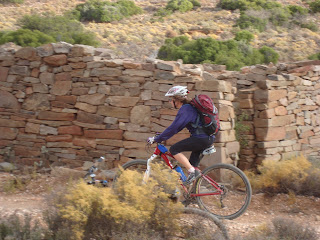 Oh yes, certain South African landowners have a nasty habit of putting "No Entry" signs on gates across public roads. This makes visitors to Anysberg drive a huge detour, because they take these signs literally. Others take the signs, literally.

As the instigator, I had three cyclists constantly putting pressure on me to deliver. Well, I did. I did deliver them unto the Ouberg Pass. They're still smiling. 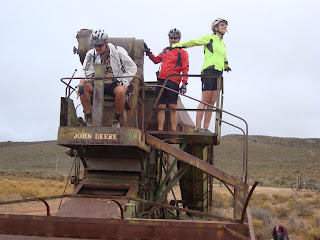 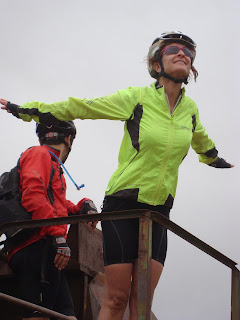 Into Montagu in the rain and mud, where the Wimpy has outdoor plastic seats for the likes of us.

And so, we rode to Montagu for coffee at the Wimpy. 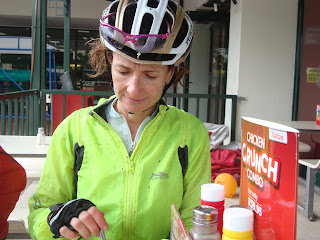 Posted by Johann Rissik at 5:32 PM