Do yourself a favour

....go over to http://sunrace-sturmeyarcher.blogspot.com/ ad look at that 5spd mixte.
Posted by Johann Rissik at 10:53 AM 10 comments: 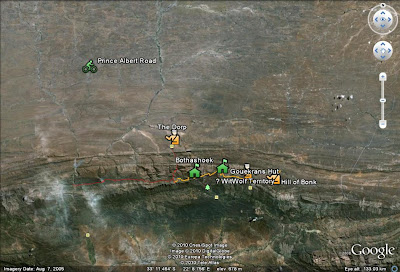 There has been considerable interest shown in the latest running of this ultra extreme multi-stage multi-day elite jol. (Clearly I need to brush up on my marketing speak)
The general idea is that a group of riders base themselves in the quaint little village of Prince Albert as it nestles charmingly at the foot of the historic Swartberg Pass (if you believe that ........) and ride, and ride, and ride.
April and May are good times to do this kind of thing here, cooler but not yet winter.
Routes unlimited, options pretty much unlimited. Major challenge is to fit in all the rides in the limited time available!
Huge attractions:
What else could one want?
Book now to avoid disappointment, only a few limited spaces still available!!
Posted by Johann Rissik at 9:36 AM No comments:

Competition No.2:
What (and no smart-ass comments please) the hell do you think that triangular depression is for?

Hell no folks, this is going too far................
The best answer wins the second slot on the Great Prince Albert Bicycle Safari
Posted by Johann Rissik at 6:39 PM 4 comments:

One of the following is a threat to humankind, tell me which one and why. PLEEEEZ 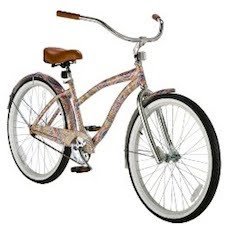 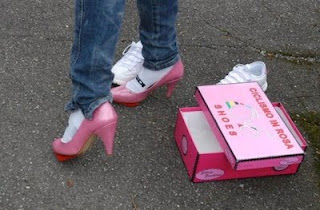 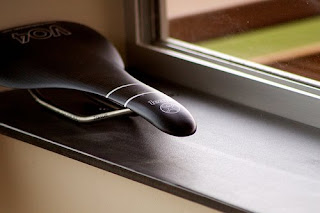 Yup, a danger to society. A serious threat to national security.
Is it:
A: The Liberty fabric pattern on that frame
B: Those heels
C: That gel saddle shloppy cover thing
D: This rakish little number
The best answer wins a slot on the Great Prince Albert Bicycle Safari.
** credit to Bike Hugger
Posted by Johann Rissik at 3:44 PM 2 comments: 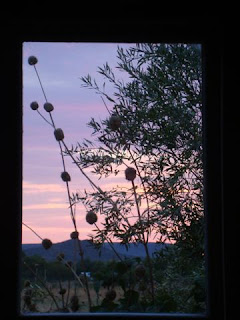 Never say never and never take conventional wisdom seriously. (If it's conventional, how can it be wise?)
No more Argus for me, now it's the World Extreme Funride Championships. With superb organisation by the organisers (who else?), tireless marshalling by the marshalls, and full-on support by..you guessed it, the supporters; what could it be but a fun?
Sandra and I decided to do the Argus a few months ago, it is a good example of what can be achieved with the right attitude. How to tackle the issue of compatibility on a tandem? One week of pre-Argus practising (it was not really training), mostly on mountain bikes. The longest ride we did on the tandem was 50km, where we managed to average 34km/h, so confidence levels were well-boosted.
Saturday morning (13th) we did the obligatory "tourist" thing of riding of riding along the Atlantic seaboard for coffee in Cramps Bay, something I would not normally have engaged in. Turned out to be a really good idea....got to choose the "Drink Stop" for Sunday.
Saturday afternoon spent doing final prep and polish (when you ride a 20 yr old Hansom tandem, you polish it!) and the breaking of one major rule. If it ain't broken, don't fix it. The 6 speed freewheel was old and worn and prone to the odd skip, so I thought I'd be super-cautious and replace it with a "bland" new one and a new chain. You see, the problem is that 6 spd freewheels are now relegated to the lower end of the market (in SA at least) so the only ones available are "bland new". While they may work well on a bomber mtb cruising the flat, they are no match for two highly motivated pairs of legs on a tandem. (more of that later) 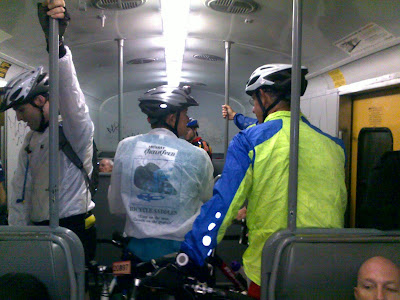 Getting to the start of the Argus has never been easier. Catch one of the special trains with your bike (R40) and arrive at the station to be ushered to the exit like the stars we are. At Claremont station I met my second cousin whom I haven't seen for probably 30 years - that's the Argus. Ian, I hope your ride went well! (Oh, I see you did 4:55:51 !) 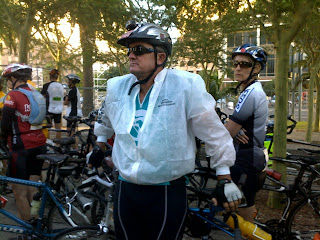 Smiles all round at the start!!
The start of the Argus is a wonderful place to be, 30 000 cyclists of all varieties, all jostling to get one foot ahead of the person next to them - as if it makes one iota of difference! The marshalls? These are the real heroes, answering the same dumb-ass questions from people who can't all be blind? A registration you are given a piece of paper which shows so clearly where your start is. Even if it was written in Russian, you could still understand it! And then in letters half a meter high, your start group. Ninety-nine percent of cyclists moving towards their pens and then up pops Rambo and cuts across the field at 90 degrees because he has just noticed he's about to be fed into the wrong chute! And talk about stress! Imagine missing your ZZ start group by a few minutes! And then there was the guy who tried to bullshit his way past the marshalls, no number, no start card, nothing. No, I lie, he a had a bike and a helmet. He tried three times to get past the same marshalls. Seems like the sentence "NO" was beyond his comprehension. Later saw the same dude pushing his bike contra-flow on the Blue Boute. If you try hard, you can stuff anything up.
Anyway the start goes according to plan, we keep upwind of the "bunch" and deal with the side blast as best we can, rather than having half the bunch being blown into us. Up the gentle climb that is Hospital Hill, suddenly much steeper with the added breeze! Strategy, stay under cover and don't try tackling the hill and the breeze at the same time.
Over the top and down the road, the tandem pulling at the reins, luckily no idiocy in front of us on that bend near the bottom. There's something very satisfying about being on a tandem, both of us just put foot and we literally flew past big lumps of cyclists. Somewhere along here, maybe it was down towards Paradise Road, we clocked 66km/h. I must here and now point out that with our maximum gearing of 53 x 14, we are proud of that speed!
Edinburgh Drive is a hill, no doubt about that, but it's disheartening to see so many people give up before they even try. We rode up this hill so hard, that it nearly cost us our race......... on cresting the hill I sent instructions down into the engine room for BigRing, Small sprocket, Full Taps. At first it felt like the chain slipping, but it turned out be one totally flucked freewheel. It appears that it could not handle the load, snapped it's lock-ring, allowing the ratchett mechanism to disintegrate and the ball bearings to start rolling back down the hill to China. Disaster? Nope. Monica was a few hundred metres down the road, so one quick phone call and she was at us with my toolbox and the old freewheel. I have never removed and fitted a freewheel so quickly...........!
Back on the road and we leap-frogged bunches huddled together for protection from the wind. I'm proud to say that the dreaded Kling-ons didn't stand a chance. Somewhere along here we first met the Nedbank mtb tandem, really nice guys, pity about the bike ;) Interesting to note that there were heaps of Nedbank jerseys around, so useful when you're marking the bunches ahead of you! Needless to say, the crowd rose to the occasion and were really behind us, the FNB stalwarts. Sadly, we were forced to make the harsh decision and simply leave them behind on Chapman's. Chap's the beer's on us, if we ever meet up. You were spirited challengers to the end, at least we know you're a good bank!
It's a lekker ride down to Simonstown, particularly when you know what's waiting for you. We had a planned coffee stop at Spill the Beans in Simonstown, pre-checked, pre-planned, even pre-tested. Quick, friendly, service and good coffee is exactly what we wanted and exactly what we got
. 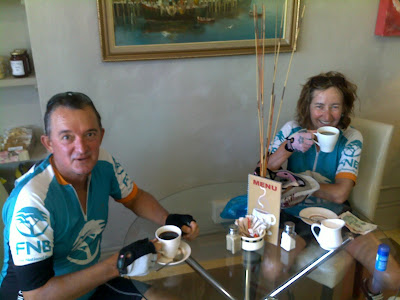 The next thing I remember was the wind hitting us from behind on the last bit of the Smitswinkel Hill. And then that long gentle descent with the wind trying to push you over the bars, the pain of the hills long forgotten. 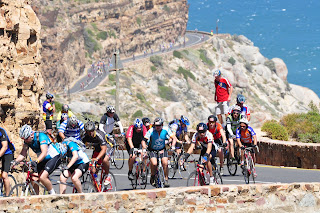 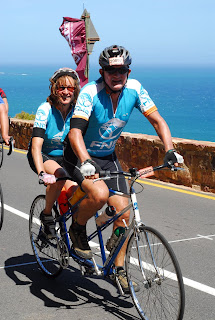 Noordhoek, Chappies, downhills, Houtbay, SugarBush Hill, downhills and then the planned stop for a drink in Cramps Bay. After all, who's racing? This is meant to be fun. 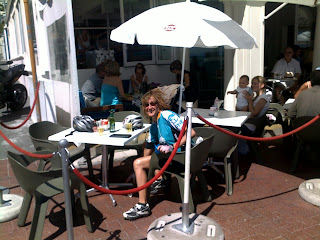 Windhoek in Cramps Bay
I must admit, after we climbed back through the barrier and got back on the bike, I was lus for speed. So we did, bolting along the same road we had been on 24hours ago, this time at 40km/h with one pink Kling-on (yup, rider 23740, that's you!). Being the nice people that we are, we kept him with us and gave him a finish he won't forget in a hurry! 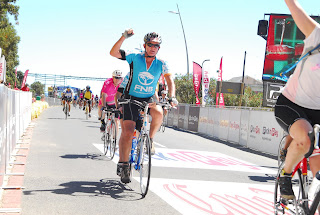 Non-Windoek Victory salute
Into the melee that is the Argus finish, again the marshalls doing all they can to deal with tens of thousands of low blood sugar attitudes. As usual, the bike park is a sight to behold, as is the efficiency with which it is run. Thank you marshalls!
A moment to reflect on the heyday of South African cycling, when we could produce bikes like this! 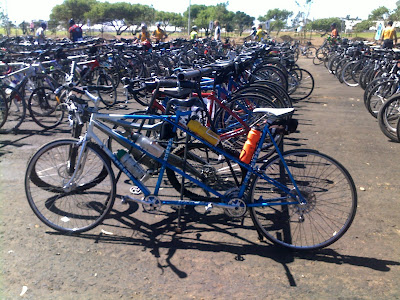 Celebratory sushi and a drink, what a way to end what was my most enjoyable Argus ever. 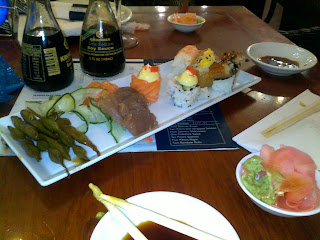 Thanks to:
and special thanks to Sandra for being a such brilliant tandem partner.
Posted by Johann Rissik at 1:24 PM 5 comments: