OK, so I'm probably showing my age................yesterday I was introduced to Whatsapp for the first time.
Given that the Nokia version of it appears to have been on the market for about 10 days, I'm not too slow.
This neat little app allows you to send text messages via the data system rather than the iniquitous sms rip-off that exists in this country. (In SA the sms business is a license to print money).
Get it here
http://whatsapp.com/dl
OK, I'm sorry if you knew all this before
Posted by Johann Rissik at 8:32 AM 2 comments:

Funny title for a post on a South African blog, I guess.
It would appear that Thanksgiving in North America is a celebration that is largely unaffected by the crass commercialism that has hijacked the one a month later. Why?
Those who know me will hesitate to say things like "Christmas spirit" and "oh, but it's for the children" or even "it's family time" within earshot. If you didn't know that about me, now you do, consider yourself warned.
While not a Christian, I support the right of others to be Christians, particularly if they support my right NOT to be one with equal fervour.
When I see "Xmas specials" and the related crap oozing into advertisements in September, it confirms for me the abuse of a festival (admittedly one the Christians themselves hijacked) for pure commercial gain.
And oh shit, the heat I take because I will not enter into the "Christmas Spirit"! What is it that the vast majority (who are no more Christian than my dogs are buddhist cat lovers) are actually celebrating? The birth of Jesus Christ? No. It's merely a mindless rush into some unnecesssary and in most cases, unaffordable consumption. How about saying STOP and just for a moment thinking whether we need all the Christmas "stuff".
How about rather saying, "I'm giving up this or that for Christmas"?
I doubt that South Africa is alone in the way this happens, but my eyes were recently opened to Thanksgiving and what it stands for in North America. Hell, even the crew over at DC got quite serious!
While I'm often critical of the way the USA conducts itself on the world stage or the way their country is run, there is much we can learn from them. Thanksgiving is but one.......
It would be appropriate for us in the southern hemisphere to be giving thanks at this time of the year. The end of the calender year.The beginning of summer. The year end break (yup, you Yankees have nothing on us when it comes to this....industry and much of business closes for a month! And in the month before and the month after they are preparing to shut down and recovering from lags in the supply chain) Imagine that, the whole country slips into neutral for a month. FOR CHRISTMAS!! Funny that, in a largely Pagan and animist country.
Anyway, I have much to be thankful for, I am very aware of that.
I chose to celebrate it by making the most of the bounty provided by my apricot trees. 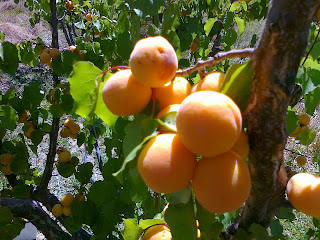 Apricots, with blemishes, with bird damage and even some with worms. The presence of worms indicates that there is no poison, unlike commercially grown fruit. 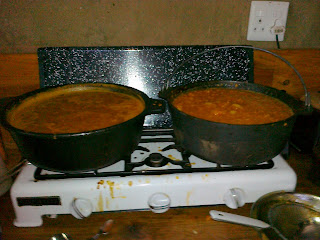 And through a freestyle process involving a lot of this, and 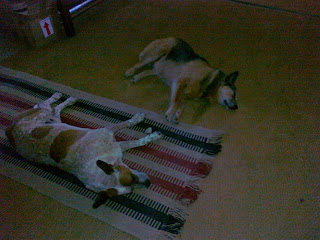 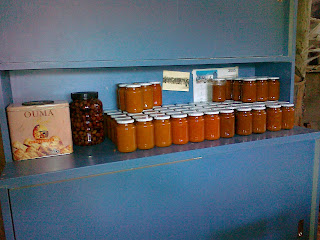 I ended up with this.
"This" being a large quantity of smoked apricot chutney, apricot chutney with achaar masala and apricot jam with ginger. And still the apricots keep coming. 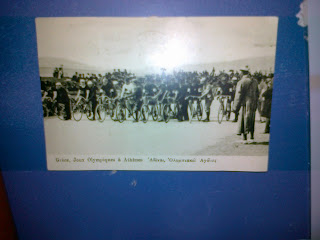 And in the background? A postcard depicting a bicycle race at the 1903 Athens Olympics.
Posted by Johann Rissik at 11:58 AM 3 comments:

My Man in Minnesota

Watch, and listen to this.

Gunnar "Don't Mess with my Carp" Berg has just posted something that blew me away.
Look. Listen. Bettye LaVette.
http://oakwoodlife.blogspot.com/
Posted by Johann Rissik at 8:37 AM 1 comment:

Humanity's Rite Of Passage: A World Tended By Adults 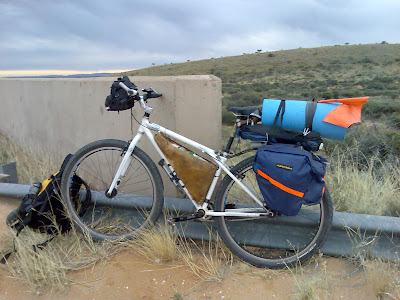 XtraBag. Frame bag. Frame pack. Call it what you want to, but it's a clever way to carry stuff, particularly heavy stuff.
I originally made this one out of Kudu rawhide (as light as carbon, stronger, not brittle, re-usable, bla bla bla) for the Sishen-Saldanha ride. http://johannrissik.blogspot.com/search?updated-max=2008-11-18T08:00:00%2B02:00&max-results=10
It could hold almost 8 litres of water in a series of 2 litre bladders (re-used wine bladders), making the bike seriously heavy. Heavy takes second place to water in Bushmanland.
Thanks to this bag, I never ran out of water, but towards the end I no longer needed to carry as much water, so filled it with food. Accessible food.
No, it's not waterproof (that's not generally required in that part of the country) and when it got totally wet at the coast it lost it's shape. Too bad. 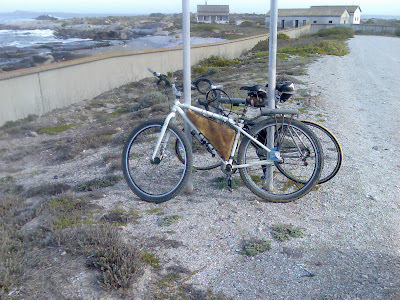 I'd been keen on making a canvas one to replace the rawhide one, with a side zip and even an inner compartment for small things, so it was fortuitous that Di O'Donovan mentioned that she was pretty good on a sewing machine. We set at it with rough sketches, then proper drawings and finally hardboard templates. 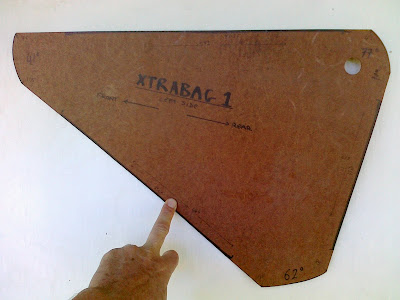 Your Salute, Reverend.
Lots of backwards and forwards to make sure everything fitted as planned, even a hole in the template to hang it up. 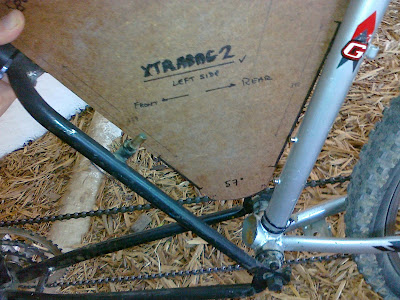 Afficionados will recognise this as the middle compartment of the XtraBike
The first prototype:
++It's made of bullet proof ripstop canvas
+ Fits the frame perfectly
+ Zip placement is under discussion
- It's off-centre (that will be changed)
- No logo (wait and see, but it's likely to involve a 16t sprocket and a finger) 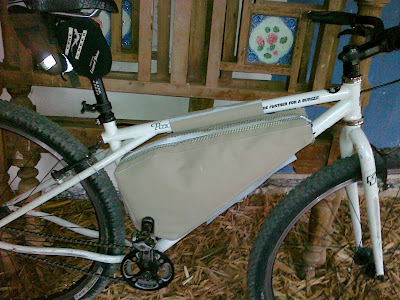 We're aiming for:
Posted by Johann Rissik at 1:34 PM 3 comments: 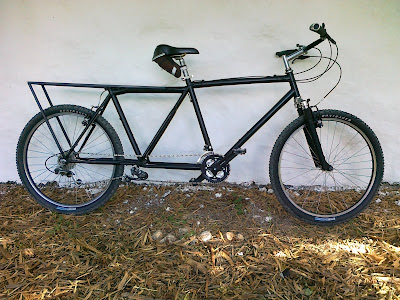 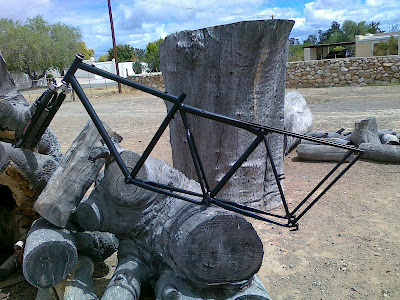 Stripped it down the other day, grinding, sanding polishing, priming and spraying. I have parked the idea of the Desert camo Sharki colour for now (it's not available in the Prince Albert powder coating booth, but rattle can matt black is ;) Thanks to the soft focus ability of my Nokia talking camera, you can't even see the high quality welds. Probably better that way.
I have also installed a new crankset and chains, well, chain and a half. Yes, new chain and new cables are half the way to solving a lot of cycling problems. 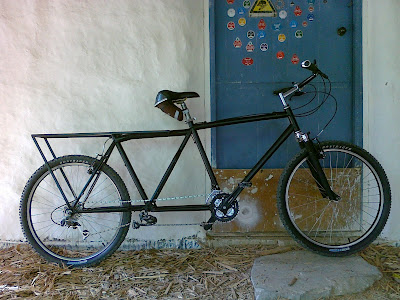 Also back on is the SLX chain tensioner (thanks to Mechanical Ray, http://fiforiders.blogspot.com/2010/06/my-freedom-challenge.html). It turns out that chain tension is an issue when you have a crankset with three functional rings. The trick seems to be to set the "middle-rear" derailleur in the middle (strange that) using the limit screws and the ubiquitous piece of tying wire. 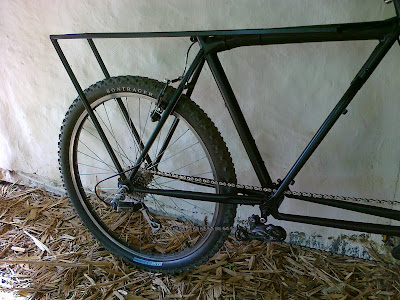 The "cockpit setup" is almost edzachary the same as the 29r, so we are off to a good start. In fact they are so similar that I reached out to change gear on the 29r...and a voice from above said "sit and spin *^%**&^%" 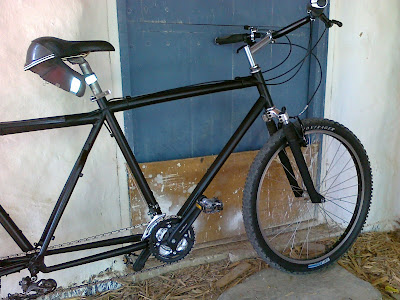 All that clutter on the bars? Mary Bars, Ergon grips, Deore brake levers and R40 (about $6) friction shifters, think I have all my bases covered there, except the bell. 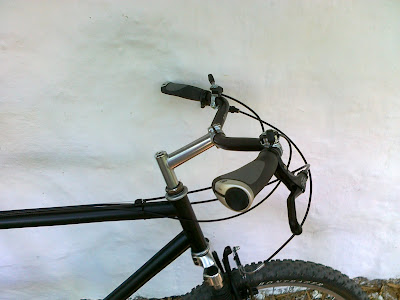 So, just the luggage to sort out. Di is making two frame bags (she of XtraBag fame) one for the front triangle (100mm wide) and one for the third triangle (250mm wide). And maybe a pair of panniers for the back.
And then I suppose I'll have to do the long trip this bike was built for.
Posted by Johann Rissik at 10:10 AM 2 comments: