It wasn't my idea, I kept on reminding myself, as we dragged ourselves and our bikes up the 54% gradient.......

About eight years ago, I took Lindsay on a semi-planned Sunday ride. Semi-planned because we eyeballed the map and agreed it should be about 40km. In 40 degree heat, a 100% distance error can scar your mates forever. I have never been allowed to forget that.

So thankfully this one was not officially my idea. Simple enough, do one and a half Freedom Challenge stages, right out of our back yard. Except that these two stages involve riding to Gamkaskloof and climbing out via The Ladder. Serious biblical stuff that's meant to add gravity to the situation.

There have been a series of meaningful training rides, regular forays up towards the ankles of the mighty Swartberg Pass. As the time drew nearer, planning got much more serious, how many beers?how many bottles of wine? how much meat? This debate was only possible because we had the luxury of a supply drop the day before. In this case the answer to all the questions was simple. Lots.

There was one potentially major hiccup in the form of disputed access. We were well-prepared, the planned first line of defence was to haul out our very officious Dikwiel Kommando ID cards, simply to experience the joy of deflating arrogance and pomposity with a simple piss-take.
The second line of defence was to simply have stated the legal position and pressed onwards. Regrettably (in that I never got to display my ID card) it never came to that and the only people we met were charm personified.

The ride started out as yet another training ride (except this time with backpacks) and the usual turning point was the first rest stop......which is where the Very Reverend Chaplain Kotze let his true colours show as he tried to lead the group in prayer.

It was very much a grind, slowly upwards, with planned rest stops not infrequently delaying progress.  By the top of the "Zig-Zags" we noticed two imposters on our tail. The cheek of it! On "our" trail, on "our" day. We have become rather proprietorial about "our" mountain. By sheer grit and determination (and by starting an hour before them) we managed to stay ahead of them and destroy their will, they eventually only managed to get ahead of us with mechanical assistance ;)

Part of the previous day's supply drop was a series of strategically placed water containers, it's a rare luxury to pull up at an unmarked bush and collect 5 liters of iced water on a hot day. It turned out to be way more than we needed, but rather too much water than too little in this part of the world.

This road was witness to the inaugural Dikwiel Kommando ride in January 2009, then bathed in the bright light of the full moon. Not many pics of that ride as it was dark ..... and some of us were sleeping on the side of the road....

This time, we were ready for the roller-coaster in the middle section. If I was slightly less techno twat, you'd been watching a video now, but please settle for this: 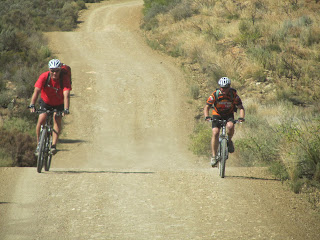 The road towards The Hell is, contrary to popular belief, neither slippery nor downhill. It is gravel and there are plenty of uphills. Long merciless grinds, inducing some auto-baptism at the mere thought of the hills ahead.

Reaching the top is a special moment, particularly when seen for the first time. To stand at the top of Die Slang (The Snake) and look out over this famous valley, about which so much has been written and spoken.

The Hell (more correctly Gamkaskloof) is an isolated valley some 20km long and probably on average one km wide. Well watered, sheltered and isolated. Isolated from meddlesome outside influence. Isolated from "modern advances". It was in this valley that people have lived for countless thousands of years, first indigenous people, later pioneers, settlers, farmers. The valley is geographically isolated, with no easy or obvious access. People who grow up under these conditions have a natural distrust of authority and the attendant ooze from "modern" society. Not trying to romanticize what must have been a hard and often difficult life, these earlier inhabitants of The Kloof lived a life in tune with the earth.

Sadly, writer Andre Brink's book "Duiwelskloof" goes to great lengths to insinuate that inbreeding was a way of life in the Kloof (even though the book is obviously a work of fiction, it's message is telling.) If Brink had bothered to "lower" himself to the level of the local inhabitants, he would have noticed that nothing could have been further from the truth. Brink's dishonesty probably stems from some deeper personal insecurities which lie not far from the then Nationalist  government's decision to put a road into the Kloof in the early 1960's.  Suffice to say that the inhabitants of Gamkaskloof were some of the most resourceful people, living within their means, with a minimal environmental impact.

"God forbid that it should become public knowledge that there are white people living as subsistence farmers" Shock, horror, dismay, shame. (This was the 1960's)
Get Oom Koos and his bulldozer to rip a road into this place, burst this bubble at all costs.

And so it came to pass that a road was opened into the Kloof and everything was fucked up for ever.

This very road that we were on.

We arrived at Hell's Kitchen, run by Annetjie Joubert (sister of the famous Oom Hendrik Mostert) to find our Windhoek's on ice. It was here we met Richard (of BOS fame ), the impertinet imposter, riding on "our" mountain. (Richard, if you're reading this, send me your postal address)  In an earlier blog post I made some comment about the Freedom Challenge being a "transect of good" and this is more of it. It's not often that you encounter a product that just makes you want to do it's marketing for it. BOS is one.

Now our man Lindsay has a deep fear of starvation, and a wife who is without doubt the best cook I know.
Starvation was not on the agenda for this trip, in fact we could have stayed for a week on the food that was waiting for us, half way through the starters I was full......And then we started the braai...and then the pudding......
..and liberty was finally added by sleep..... Nietzsche.

Dawn, crisp, cool and baboon-announced, in the background the soft roar of the Gamka River flowing strongly with water released from the Gamkapoort Dam.  http://fiforiders.blogspot.com/2012/03/in-shadows-of-signs.html

Communication is double-edged sword, do you sit your fellow riders down to a full blow by blow briefing or do you let them discover things on their own? I know I can be a pain, detailed planning, what-iffing the bloody thing to within an inch of it's life. In this case I let it flow, let's see what happens.

Day two was to be a much bigger challenge....

Two weeks after the first Freedom Challenge in 2004, I had been to the base of "DieLeer" (The Ladder) and made a mental note to one day climb it. The image of the snow around the Poplar tree at the base of the Leer had left such a major impression on me that for years I have been able to direct riders there with absolute conviction.
The difference was that the last time I went there, it had been with substantial motorised assistance. That same assistance which shortens distance and turns mountains into molehills........

Thanks to Steven Thomas, my foreshortening had been given a rude stretch, helping reality hit home quite quickly. Seeing the Kleinberg hill in the distance completed the process.

"Die Leer" is one of the ancient access routes to the Gamkaskloof valley, two others followed the Gamka river up- and downstream. The upstream route was blocked when the Gamkapoort dam wall was built in the 1960's. Die Leer has always been an important access route for residents of the valley, used by farmers to take produce out and to bring supplies in. Having to carry one's "stuff" up or down this mountain could turn most people into minimalists. Quickly.
Even though pack donkeys were used, the relative cost of transport required people to be thoroughly resourceful. Imagine carrying a Dover stove, in pieces, down Die Leer? Give me my bike any day.

Once we reached the sign at the top and the beginning of the jeep track, we assumed that the worst was over. Well, there's actually another altitude gain of over 350m before the end of the jeep track. By now water was in very short supply, not to mention the sense of humour or the interest in digital photography.

The jeep track is a serious flattener of batteries, but fortunately there was water in a cattle trough which improved the general atmosphere somewhat.

Finally, the last short sharp descent to the Bosluiskloof road and salvation.

Needless to say, the next 25km were DOWNHILL with a tailwind, at times were were freewheeling along at 40km/h.

Talk about having earned it

Think of those Freedom Challenge riders who do all this, and more, in one long day. 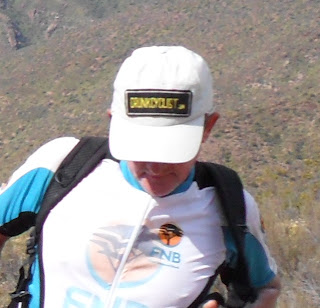 Posted by Johann Rissik at 1:04 PM